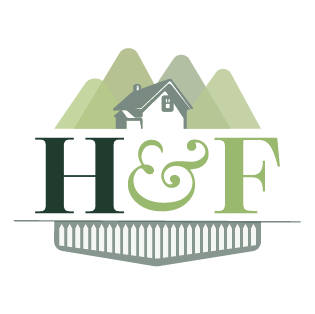 How to Identify and Treat Lawn Fungus

Do you have patches of discolored grass on your lawn? Do you see small white or yellowish spots on the leaves of your favorite flowers? Does the lawn in your favorite recreational area suddenly start turning yellow? If so, you may have lawn fungus.

Lawn fungus is a term used for several different fungal diseases that affect lawns. These diseases are difficult to diagnose and treat because their signs and symptoms are often similar.

What Is Lawn Fungus?

Lawn fungus is a term that refers to several different fungal diseases that affect lawns. These diseases are difficult to diagnose and treat because their signs and symptoms are often similar.

However, with proper diagnosis and treatment, lawn fungus can be prevented or eradicated.

There are many different types of lawn fungus, and they can affect both grass and ornamentals.

The signs of lawn fungus are often small, white, or yellowish spots or patches on the leaves of your lawn. They can appear as a single patch or as a series of small spots that run in a line or bands on the surface of the leaf. The spots can be round, almond-shaped, or irregularly shaped, and they often have a velvety or felt-like texture.

In addition to these visible signs, lawn fungus can cause the affected lawn to be velvety and have a distinct musty or earthy odor. If you suspect that your lawn has fungus, it’s best to have it tested. You can send a sample to a lab to be tested for fungus. If the lawn is infected with oomycete fungus, it will also show signs of infection. 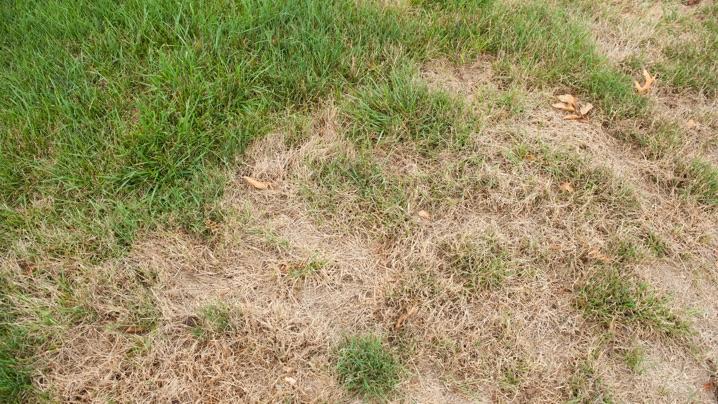 Months with symptoms - May to September

Control - Fungicides are effective for brown patch control. They can be used as a prevention or on a curative basis. Those measures may not be effective during periods of high temperatures. Because the cool-season grasses grow slowly, they can not recover from the damage under these cold conditions. It is better to take preventive fungicide measures for tall fescue and creeping bentgrass when the conditions are favorable for disease development. For the best results, you should start a preventive application in the late spring or early summer when night temperatures exceed 60°F. 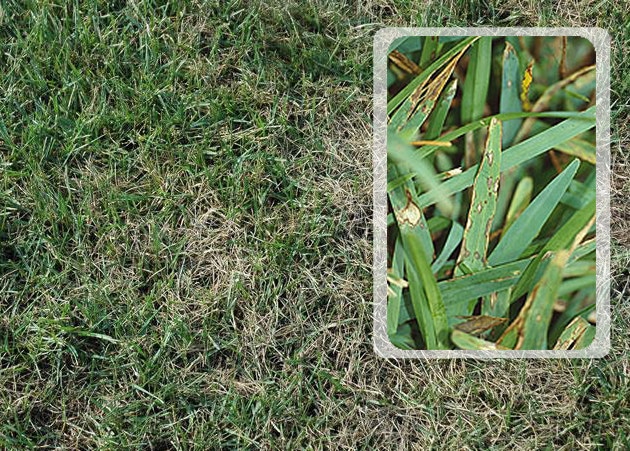 Control - Preventive method is shown best for gray leaf spot disease. The treatment should start during mid-June or early July in most locations, repeating applications on a 14 to 21-day interval. 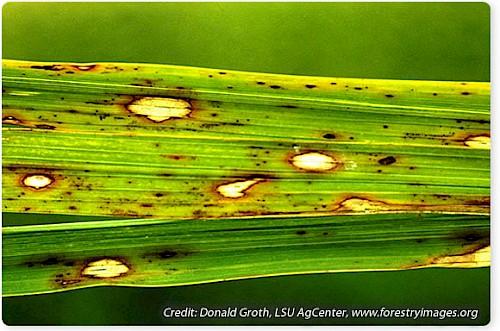 Symptoms - Initially appear as small, brown/black spots on the grass.

Months with Symptoms - March to June, September to November.

Control - Both preventive and curative. 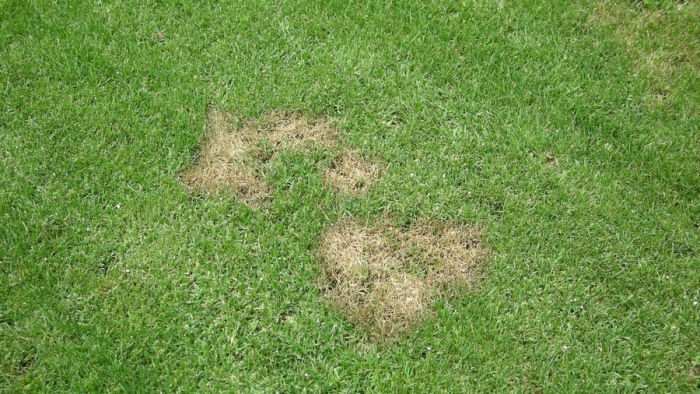 Symptoms - For cool-season grass, Pythium first appears as small circles up to 1 foot in diameter during warm and humid weather. For warm-season grass such as bermudagrass, Pythium appear as small black/purple spots expanding into larger irregular areas during prolonged periods of rainy/cloudy weather at any time of the year.

Months with Symptoms - June to August. 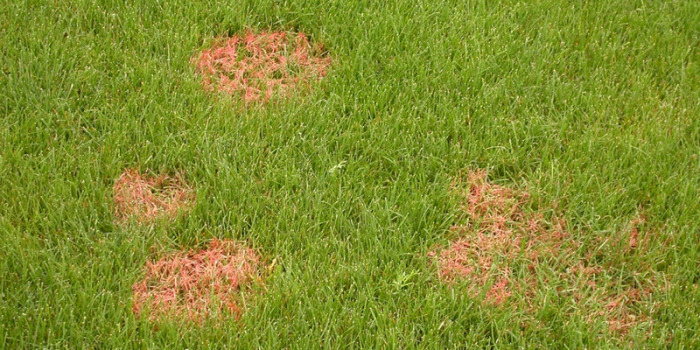 Months with Symptoms - March to June, September to December.

Control - Any of the preventive or curative measures 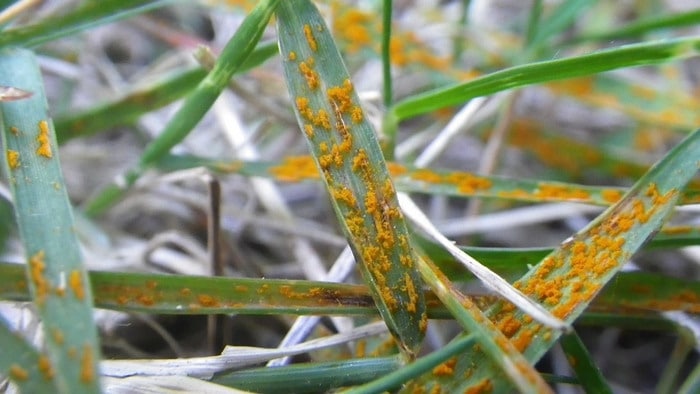 Symptoms - First there are small patches on leaves and stems. They develop into yellow-orange pustules that release spores.

Months with Symptoms - March to June, September to November. 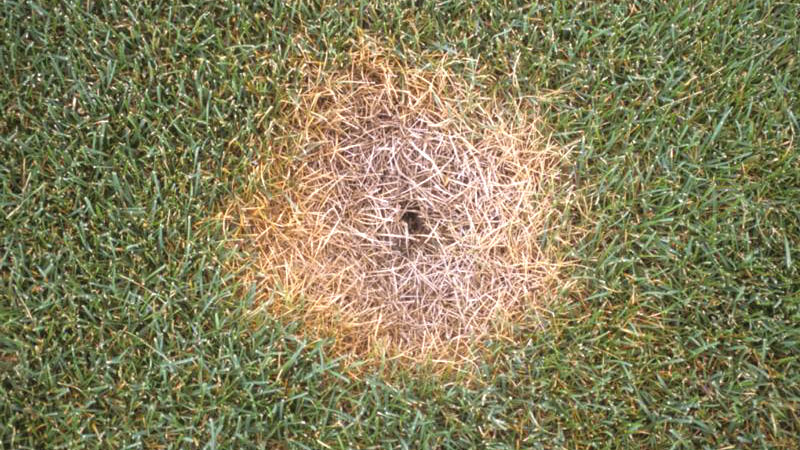 Symptoms - Summer patches appear in circular patches/rings, from 6 inches to 3 feet in diameter. The grass within these patches is colorless, prone to wilt, or poorly grown.

Months with Symptoms - June to September.

Once you’ve identified the type of fungus and determined that it’s affecting your lawn, the best course of action is to prevent it from returning and spreading.

The first step is maintaining healthy soil by keeping it moist and not overfertilizing it. Having good soil structure and organic matter is also important because it creates a healthy environment.

When the fungus is out of your control, proper sanitation is the only way to eradicate it. Remove all debris such as leaves, sticks, and grass clippings from around the base of trees and other plants in your yard. It will help prevent the fungus from infecting these plants.

After that, wash the sidewalk, driveway, and other concrete areas that border your lawn with a 1% bleach solution (1 part bleach to 9 parts water) once a week. It will nearly completely kill the fungus on your lawn and sidewalk. However, it won’t kill the fungus that’s in the soil, so you’ll have to treat the soil with a fungicide as well.

How to Treat Lawn Fungus

If you think that your lawn has fungus, the first step is to determine the type of fungus. The easiest way to do this is to send a sample of the soil from under the lawn grass to a lab for analysis.

While the lab results are coming back, you can treat the lawn with a fungicide, or a fungistatic.

The fungicide controls the growth of the fungus, while the fungistatic prevents it from reaching the growth stage where it can produce visible signs of infection.

How to Do Lawn Fungus Control

For fungal treatment, you will need two things:

You can use a handheld spreader if working on a small lawn or a wheeled spreader which is more convenient for large areas.

Scotts Turf Builder is our pick.

For the fungal treatment product, you can consult your local store. We recommend the Bayer Advanced Fungus Control.

Lawn fungus is a common fungal disease that affects both residential and commercial lawns. It’s often difficult to diagnose and treat because its signs and symptoms are similar to other diseases. To prevent it from recurring, maintain healthy soil, and clean up any leaves, twigs, or other debris in your yard.

Even though you may have found a treatment that works for your lawn, it doesn’t mean that the fungus is gone. The fungus can remain in the soil, and it can come back even if you’ve successfully treated the lawn. For complete lawn fungus removal, you’ll have to focus on preventing the fungus from coming back.